International Drug Policy: The UN and the Birth of Maverick Nations 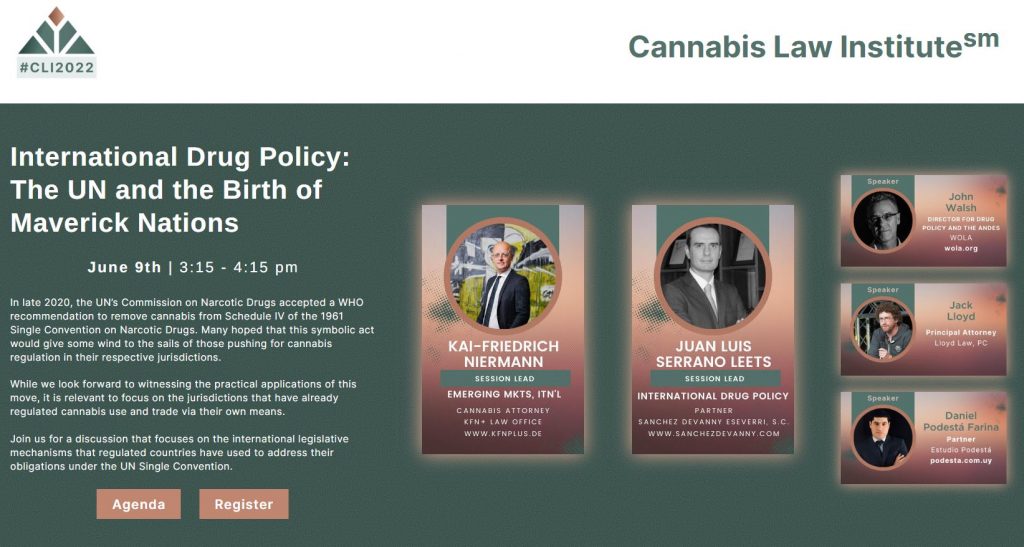 In late 2020, the UN’s Commission on Narcotic Drugs accepted a WHO recommendation to remove cannabis from Schedule IV of the 1961 Single Convention on Narcotic Drugs. Many hoped that this symbolic act will give some wind to the sails of those pushing for cannabis regulation in their respective jurisdictions.

While we look forward to witnessing the practical applications of this move, it is relevant to focus on the jurisdictions that have already regulated cannabis use and trade via their own means. The session will discuss the international legislative mechanisms that needed to be used to provide regulated access to cannabis in countries like Canada and Uruguay, while not explicitly skirting their treaty obligations.

In order to find a way out of the obligations and restrictions of the Single Convention, various possibilities present themselves, in harmony with international law and political and diplomatic requirements. One is withdrawing from the 1961 Single Convention followed by re-accession with a specific reservation regarding cannabis which is recognized as a legitimate procedure. This is the procedure used by Bolivia regarding the traditional use of coca leaves. Bolivia had initially tried to amend the treaties but was blocked by a small number of objections.

The other one is the inter se procedure for treaty modification, as provided by Article 41 of the 1969 Vienna Convention on the Law of Treaties, and intensely discussed by panelist John Walsh and Martin Jelsma in their numerous publications, for example “Balancing Treaty Stability and Change”. Inter se modification is a procedure specifically designed to find a balance between treaty regime stability and the need for change in absence of consensus. Just as with a collective procedure of withdrawal with re-accession, a group of like-minded could modify, between them, their obligations under the treaty regarding cannabis an allow for a legally regulated recreational cannabis market, while maintaining their obligations towards the countries that are not part of the inter se agreement.

Panelists will report from their own jurisdictions on the path their government has taken or will take, and what options are not recommended, such as overbroad and indefensible interpretations of the text of the Single Convention and surrounding circumstances, as most recently attempted in the recent publication “High Compliance”.